Due to configuration errors or human error, significant numbers of people may have accidentally checked GitHub credentials into GitHub commits as metadata, most commonly a username as the author name and a password in the email address field. We estimate in the region of 50,000 to 100,0001 user credentials may have been affected covering a wide range of organisations including governments, corporations, large open-source foundations as well as smaller organisations and individuals.

GitHub have since rolled out changes that auto revoke PAT tokens and GitHub credentials if they are detected in commit metadata and have performed the task retroactively so any developer on GitHub.com who may have been affected in the past should have received an email already.

While GitHub has a form of MFA known as ‘Verified Device’ https://github.blog/changelog/2019-07-01-verified-devices/, many users still choose to re-use the same password across multiple services so it’s important to check if you have accidentally committed any credential and what the risks are related to your account and any organisation you are connected to.

As there are still leaked credentials associated with this issue in GitHub and other datastores we’ve chosen not to disclose any specific details about affected organisations or repos at this time.

How we found the issue

We were first alerted to this form of credential leak by a developer who had accidentally committed their username as their committer name and their password as their committer email address. Interested by this, we manually analysed several internal repos for this particular client and found that this had happened before a number of times over the years, possibly without the users ever knowing they had done this.

Offering to perform the same task against this client’s public repos, we found a few instances, including a functional PAT token that would have allowed us to write to at least some of the repos belonging to the client.

Automating the scanning process and choosing some large public organisations, we discovered that while it was a rare event, it was happening and had been happening for many years without many developers realising. With the huge numbers of commits on GitHub even comparatively rare events occur a significant number of times. The implications were terrifying. Many open-source projects may have been disclosing developer credentials in clear text in the very metadata of their projects.

When the developer first spoke to us, they explained that they were setting up an IDE on their machine and that through setting up a new project, they were prompted for a git author name and email address. However due to muscle memory and seeing a prompt similar to a login screen, they entered their credentials which were saved as commit metadata every time they committed to any repo.

The following screenshot shows as an example of what IntelliJ looks like when you attempt to commit to a repo with no configured author details. Anything you enter here will be saved in a location such as ~/.gitconfig and the contents committed to git any time there is a git push on this device. 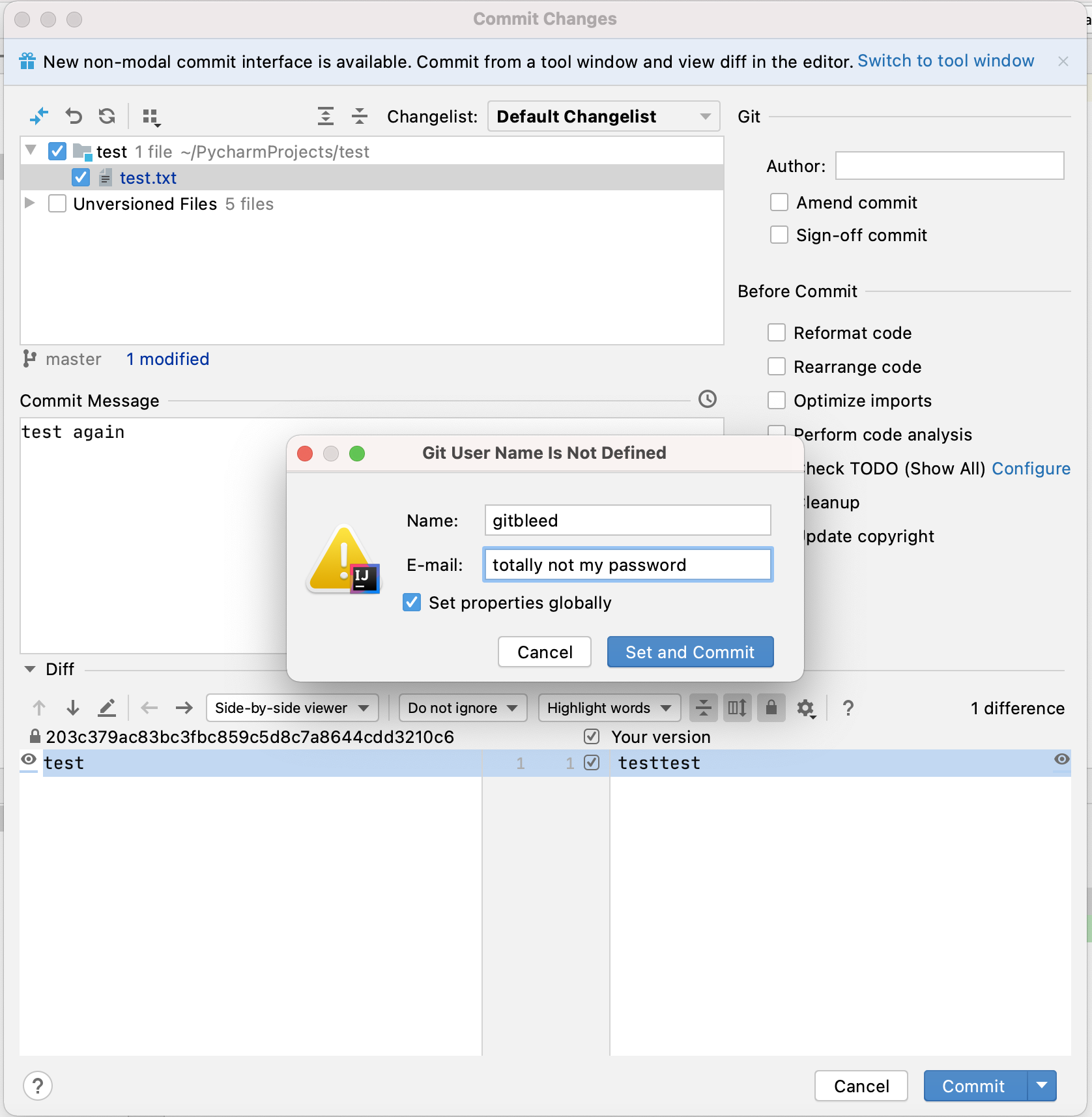 There could be other reasons for this, including bugs in automation scripts and possibly a misunderstanding of the git CLI. However, as well as passwords we found lots of other bits of information such as left-over command line parameters and even extensive internal LDAP group information.

How to see if you are affected

All our research was focused on GitHub, both GitHub enterprise (on-prem) and GitHub.com as that is the tooling used by our clients. However, it is possible that other code repository systems are also affected by this or a similar issue.

In a future blog post we’ll go into more details of the scripts we used to investigate this issue, along with some other external sources of data that also leaked GitHub credential information.

In this post we’ll summarise a couple of simple ways to look for secrets in GitHub commit data.

If you think you may have been affected, checking your git config is the first step that I would recommend, as it would show you the contents of the author email address being automatically used on each commit.

This method is perhaps the least automated but also the simplest. Clone a repo that you have pushed to, navigate to that directory and run git log| grep Author | grep -v @. This method is not fool proof however and anyone who has an @ sign in their password would need to perform an enhanced version of this grep as it would otherwise be removed from the results.

You can use the GitHub Advanced Search interface ‘GitHub Searching Commits’ https://docs.github.com/en/search-github/searching-on-github/searching-commits to search commit metadata, for example using committer-email, the most common place we found passwords. It was easy to identify users who had committed well-known common passwords. However, while this does work it would also potentially expose any password you are searching for in browser history and web logs etc and should only really be used for research purposes.

It’s also easy to use the GitHub search API, which at the time (August/September 2021) was in preview. We used it to return the number of commits with a string matching a common password set as the committer email address.

Whilst GitHub have implemented a number of mitigations it is still possible to find examples of secrets in commit metadata.

It should also be possible to use the user events API to view all of your personal commit data too however the GitHub documentation suggests you may be limited in the number of events and the timelines for which you can search https://docs.github.com/en/rest/reference/activity#events

For Git clients and IDEs

We found leaked credentials in a number of very popular open-source projects. We scanned all the repos in a sample of 70 open-source organisations used by one our clients and in approximately half of them found strings which looked like plausible passwords, as well as some PATs. These in theory could have been used to make unauthorised changes to these projects.

For organisations using an external identity provider, e.g., via SAML, GitHub should have no knowledge of the actual credentials. Therefore, the automated security checking implemented by GitHub to prevent users from accidentally leaking credentials in commit data may not detect these.

Users may commit across a range of domains, including to on-prem hosted GitHub Enterprise, GitHub.com and to repos in multiple organisations. This has a number of implications for detecting and remediating leaked credentials including:

Whilst GitHub started to deploy some remediation in September 2021 there were, and potentially still are, risks associated with credential reuse for exposed credentials. We felt that on the balance of risk is was better to wait to publish any details until GitHub had completed the majority of their remediation work.

We plan to release more details in the coming weeks which will include:

This research was lead by:

As with all research other people contributed advice and guidance along the way including, but not limited to:

When we first started researching this issue (July/August 2021) Carolos Foscolos came up with the name GitBleed4, he also created a logo and registered gitbleed.com. We also then registered gitbleed as a github handle and @gitbleed on twitter etc. We have been holding off publishing details to allow GitHub time to implement mitigations.

In the meantime, other researchers found an issue with information leaking from a GitHub repo when using the --mirror switch with git clone https://wwws.nightwatchcybersecurity.com/2022/02/11/gitbleed/ and named it GitBleed. As naming things is one of the two hard problems in computer science5 and the issue we’ve been researching is no longer ‘GitBleed’, we have gone with NotGitBleed.